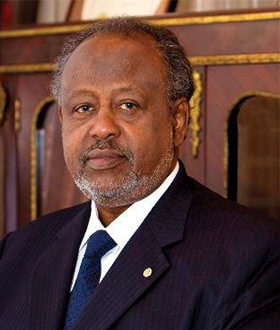 The political career analysis of Mr. Ismaïl Omar Guelleh has more than one aspects. All of them highly contributed to the fabric of leadership and stature as a statesman in his body. Accordingly, three steps have been observed in his training and maturation years;

1- The period of struggle for independence in which Mr. Ismaïl Omar Guelleh demonstrated an active commitment led to his ouster at the body of the General Security in 1974. Since this year, Mr.Guelleh spent all his energy to give new impetus to the African People's League(LPA) that was chaired by Mr.Hassan Gouled Aptidon. During this crucial period that shaped the destiny of the nation, Mr.Ismail Omar Guelleh actively involved in the public awareness of independence.

2-His frequent participation in international conferences and his experiences made Mr.Guelleh as a member of the delegation of LPA that would be responsible for conducting negotiations on independence with Paris in 1976.

3- By the proclamation of independence on June 27th 1977, the President of the Republic called his circles to grant him the heavy responsibility of General Chief of Staff post. This was the time when he was only 30 years old. Close associate to the President, the young Chief of Staff must have immediately accomplished two major challenges; these were to assume the heavy burden of internal and external security of the country, and to control the risk of inter-ethnic clashes. Within this turmoiled regional context, Mr.Omar Guelleh managed to demonstrate a stable pragmatism through its principles of neutrality for his young state. Mr. Ismaïl Omar Guelleh proved his high professional qualities and asserted himself as the interpreter of the Gouled policy. Activist of People's Alliance rally for Progress (R.P.P) since its inception on March 4th 1979 and the Chairman of the Central Committee since 1981, Mr.Ismale Omar Guelleh directed the cultural committee of the party. In 1987, he joined the highest political body of the training and became a member of the Political Bureau.

4- During the signing of the peace accords between the government and the Unity and Democracy (FRUD), his politician qualities proved strong determinancy in the negotiation process that led to the signing of the Peace Accords of December 24th 1994 and May 12nd 2001 without the mediation of a third country. With this political success 1996, Mr. Ismaïl Omar Guelleh assumed the position of 3rd Vice President of the Political Bureau. His dedication, deep experience, fierce defense of the national interests, sense of humour, tolerance and constant desire to serve his state legitimately justified his rise in the politics. These qualities dinally distinguished him from all other virtual presidential candidates.

At the end, the man of the alliance between R.P.P and F.R.U.D.was elected a presidential candidate, who was already familiar to his countrymen. Since its independence, the Republic of Djibouti observed and accompanied the national political landscape. In his fifty years, Mr. Ismaïl Omar Guelleh became the ideal leader of his party thanks to his natural abilities and rapid manouever technics with the poise and warm handshake. As a communicator, conductor, diplomat, strategist, the candidate of the R.P.P has always benefitted from his skills in the state with his acute and profound vision of socio-political reality of the Republic of Djibouti.